What is Developmental Co-ordination Disorder (DCD)?

‘Developmental Co-ordination Disorder (DCD), also known as Dyspraxia, is a common disorder affecting fine or gross motor co-ordination in children and adults. This condition is formally recognised by international organisations including the World Health Organisation. DCD is distinct from other motor disorders such as cerebral palsy and stroke. The range of intellectual ability is in line with the general population. Individuals may vary in how their difficulties present; these may change over time depending on environmental demands and life experience and will persist into adulthood. An individual’s co-ordination difficulties may affect participation and functioning of everyday life skills in education, work and employment.’ Adopted by Dyspraxia DCD Ireland from Movement Matters, (2012)

Students diagnosed with DCD find it exceptionally difficult to acquire the movement skills that are expected of them in everyday life and are often referred to as ‘clumsy’. Such students do not suffer from any known neurological condition and their difficulties are not explicable in terms of a generalised delay in development. Students may have difficulty co-ordinating their movements, perceptions and thoughts. They exhibit difficulty with everyday tasks such as buttoning shirts and using a knife and fork, and may confuse left and right.

In school, activities such as writing, Visual Arts, and Physical Education may pose problems. In play, difficulties may be observed in tasks such as running, jumping, hopping and catching a ball. In the classroom, the student may bump into and drop things and tend to find drawing and writing difficult. It is often difficult for the student to maintain erect posture, either when sitting or standing, and the effort expended on this can be considerable, giving rise to fatigue. Students may also need to prop up their bodies with their arms, which may cause problems when they have to write. This difficulty may also result in students being fidgety or exhibiting a tendency to lie across the desk.

Some students have additional speech problems, others are distractible and show an inability to organise their behaviour. Students may also have poor spatial awareness. Students have difficulty with self-help and organisational skills and may find it difficult to remember what equipment is needed for particular activities and typically will mislay their belongings at school. Students may have an inability to recognise potential dangers (e.g. using Bunsen burners and other equipment in science and technology subjects). At home they may be untidy and slow at tasks that require fine-/gross-motor skills.

Often students may appear to have a lot of information but are unable to record that information in a logical and meaningful order. Their written work does not match their apparent verbal ability. These difficulties can lead to frustration and problems with self-esteem, which can further lead to either withdrawn behaviour or disruptive behaviour. 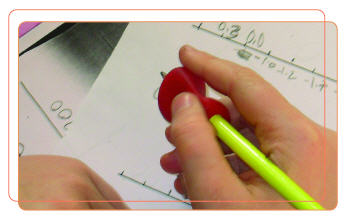