The Word Bingo App is used by Patricia Garry who works as a resource teacher in St. Conaire’s national school in Shannon in County Clare. St. Conaire’s is a mainstream primary school which caters for children from Junior Infants to Sixth Class.

Patricia uses the App for building sight vocabulary, particularly the words on the Dolch List-220 - she summarises this as follows:

Many SEN teachers will be familiar with the Dolch List-220 of the most commonly used sight words in the English language. Word Bingo is an App which builds on and reinforces the teaching of these very important sight words.

She summarises her experience of the App as follows:

I have used this App with a wide range of pupils with varying levels of difficulties including children with autism, children with speech and language difficulties and children with moderate general learning disabilities. I find it to be an extremely useful App. It is very child friendly with bright, colourful and interactive graphics. It also self-corrects which allows the child to work independently. The children love playing the games, particularly Word It Up and Word Fling. They are always trying to beat their best score in order to get a bonus Bingo Bug. 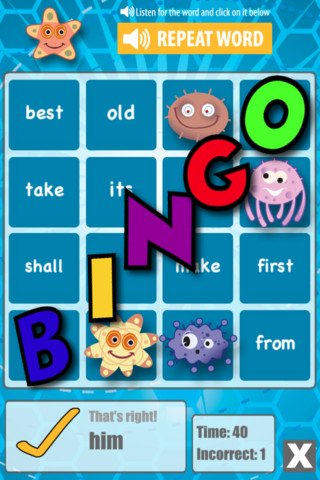 Word Bingo presents the child with a bingo board which consists of sixteen sight words. The child must listen to the word the Bingo Bug calls out and locate the word on the bingo card. When the child has completed a line horizontally, vertically or diagonally, they have completed the game. The App keeps track of the time the child takes to complete each game. The faster they complete the game, the higher their score. The game also encourages them to beat their best score and will award a Bingo Bug when they are successful.

Spelling Practise provides the child with the opportunity to practise spelling a number of Dolch List words. The child is presented with a number of letters and must then tap and drag the letters to spell the word the Bingo Bug calls out. The App allows the teacher to show or hide the spelling of each word depending on the ability or level of the child. 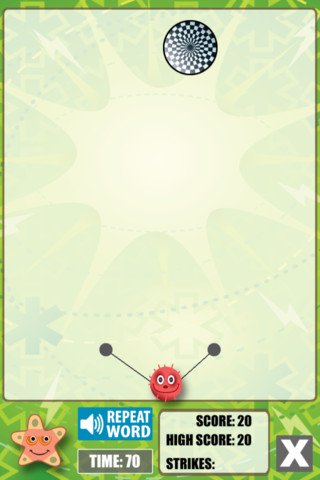 Word Fling presents the child with a choice of three words. The child must select and tap the correct word which the Bingo Bug calls out. When correct, a Bingo Bug and a bungee cord will appear. The child must pull down on the bungee cord and pull the cord to the left, right or straight ahead depending on the desired target, to release the Bingo Bug, with the aim of hitting the target. The more targets achieved, the higher the child’s score. 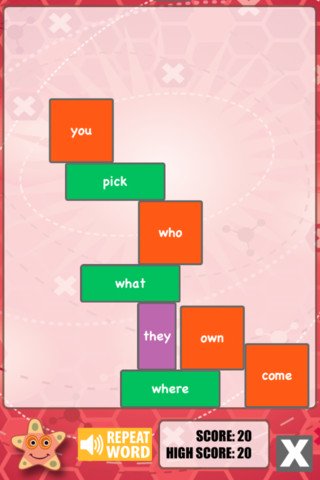 Word It Up presents the child with blocks containing sight words. The aim of this game is to prevent the word blocks from stacking up and reaching the top of the screen thus ending the game. When the child locates and taps on the word which the Bingo Bug calls out, that word disappears.

Similar to the structure of the original Dolch list, the words are divided into five categories: pre-primer, primer, first grade, second grade and third grade. There is also a section which combine all five categories together and another which covers common nouns.

The App has an ability to keep track of the progress of up to thirty pupils at various levels at any one time.

Patricia has found it easy to tailor the App for her particular needs:

The App has some excellent settings which allow the teacher to select upper/lower case letters, chose whether to hide or show spelling hint, select whether to overlap word lists and turn on or off background music. It is also possible to erase previous pupil profiles and add new pupil profiles where space may be an issue. I found the ability to turn off the background music while still being able to hear the words called very useful, as some students particularly those with autism find the background music overwhelming. The settings can be accessed by going to the home screen and clicking on the information button on the bottom right hand corner of the screen.

The App gives very good feedback on each child’s progress in the form of a detailed report card for every student. It outlines their score in each word allowing the teacher to identify the words which they are fluent in and those which they are finding difficult, thus quickly highlighting any words which may need further teaching. The report card is updated after every game and can be accessed in the settings section under pupil profile.

For those who would like to try out the App before purchasing, it is also available in lite version in the App store with some limited functions. It is also worth noting that there is a similar App available in maths called Maths Bingo which reinforces and supports the acquisition of addition, subtraction, multiplication and division facts.

Compatible With: Requires iOS 4.3 or later. Compatible with iPhone, iPad, and iPod touch. This App is optimized for iPhone 5.